The truth doesn’t sell well. Throw in a 24-hour news cycle, difficult-to-understand studies, and media companies scramble for the latest viral hit, and it’s no surprise that misinformation spreads like wildfire.

There are some myths that pop up in the media again and again. We’ve investigated the ten biggest myths spread by the media.

Myth 1: Bread/Carbs are bad for you

Carbohydrates have gotten a bad rap in the media. Critics have been especially tough on bread, since it also contains gluten. In contrast to the reports claiming that gluten is universally unhealthy, evidence suggests it produces symptoms predominantly in those with intestinal disorders.

The relationship between carbohydrates and insulin is a breeding ground for nutrition myths. Insulin was one of the very first hormones to be discovered, and it was also the first hormone to be investigated in the context of sensitivity. Early evidence led people to believe that an increased carbohydrate intake could cause insulin insensitivity. This is moreso true for diabetic and insulin resistant people (usually obese individuals) overeating carbohydrates, but the myth persists.

While gluten gets all the attention, other compounds may be as or more important for people without celiac disease who suspect that they have gluten sensitivity. For example, some of the same researchers who discovered that gluten intolerance exists in people who don’t have celiac disease did a much more thorough follow-up study, and concluded that gluten was not necessarily to blame in those with irritable bowel syndrome. They suggested that compounds falling under the category of FODMAPs (which are present in a variety of plant foods) may be a greater issue.

The Truth: Carbohydrates have been vilified long enough. As long as you don’t overindulge and exclude other food groups, starches are not inherently harmful. While some are sensitive to wheat, the gluten isn’t necessarily to blame, and other foods may be even more implicated.

Myth 2: Eggs (especially egg yolks) are bad for you 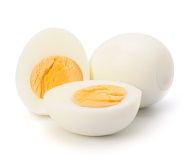 If there’s one thing the media is good at, it’s scaring you away from perfectly innocent foods.

Eggs have been demonized because their yolks, which are chock full of nutrients, also contain high levels of cholesterol. Though that sounds scary, eating food high in cholesterol doesn’t translate to increased cholesterol in your blood.

The actual research shows that unless you have a pre-existing condition, eggs are a fantastic source of protein, fats, and nutrients. Their association with cardiovascular disease is a myth.

The Truth: Eggs are a great source of protein, fats, and other nutrients. Their association with cardiovascular disease and high cholesterol is severely overblown.

Absolute statements like this one are the nutrition myth’s best friend. Cancer is particularly difficult to discuss in absolutes. After all, almost everything we eat has the potential to cause cancer.

For example, antioxidants could both promote and hinder cancer growth, but the effect is usually too small to notice.

Some compounds, like polyaromatic hydrocarbons (PAHs), found in smoked meats, have been found to damage the genome, which is the first step to potential cancer. Current evidence suggests that red meat can pose a cancer risk for people with poor diets and lifestyle choices. If you don’t smoke, have a consistent exercise schedule, and eat your vegetables, red meat’s effect on cancer is nothing to worry about.

The Truth: The fears about red meat and cancer are exaggerated. Eliminating other risks of cancer, like smoking, and practicing healthy lifestyle choices will render the risks of red meat negligible.

More: Does red meat cause cancer?

Myth 4: Saturated fat is bad for you

The traditional way to lose fat for a long time was a low-fat diet. But just like eating cholesterol doesn’t directly increase your cholesterol levels, eating fat doesn’t make you fat.

The myth that saturated fat causes cardiovascular disease is not true. Food quality is what matters – there’s a big difference between eating a steak and a greasy hamburger with fries.

The Truth: Saturated fat itself will not lead to heart disease or cardiovascular disease. In fact, you need a bit of saturated fat to keep testosterone production normal!

More: Is saturated fat bad for me?

Myth 5: Salt causes high blood pressure and should be avoided

Most myths are rooted in a grain of truth. It’s true that people with salt-sensitive hypertension (SSH) should avoid salt because it raises their blood pressure.

A recent study however, suggests there is no association between salt consumption and hypertension, a condition characterized by abnormally high blood pressure.

Instead, evidence suggests high body weight, as measured by BMI, is associated with elevated blood pressure.

Whole grain bread is claimed to be better than white bread because of its high fiber and micronutrient content. Plus, it has a lower glycemic index as well as insulin index, which means it results in lower insulin release after a meal.

All of this is true, but the media frequently fails to mention that the actual differences between white and whole wheat bread are practically insignificant. Whole wheat bread’s ‘high’ fiber content is not high compared to fruits and vegetables. Even though many micronutrients are removed during the processing of white bread, many loaves are later fortified with additional nutrients.

One actual difference between wheat and white bread is the phytic acid content in wheat. Phytic acid binds to dietary mineral like iron and zinc, which can slightly reduce their absorption in the body. More importantly, phytic acid also has a protective and anti-inflammatory effect on the colon. So there’s a little bit of bad, and a little bit of good.

The human body’s preferred energy source is glucose (a sugar). Fructose, another sugar, can also be used for energy until the liver is full of glycogen. Once fructose can no longer be used for energy, it is converted into fatty acids.

Early evidence led to the belief that fructose could cause fatty liver disease, as well as insulin resistance and obesity. By extension, high fructose corn syrup (HFCS) is frequently said to be unhealthy, since it is high in fructose.

Liquid HFCS has a fructose content of 42-55%, with some variation due to production methods. Sucrose, also known as table sugar, is 50% fructose. Unless you are consuming over 100 grams of sugar a day, the different of -8% to +5% will make no difference.

The Truth: HFCS and table sugar are very similar from a health perspective. Though HFCS may sometimes contain more fructose, the difference is negligible.

More: Is HFCS worse than sugar?

Myth 8: Too much protein can cause bone and kidney damage

Carbohydrates and fats are often blamed for various health issues. The third macronutrient receives its share of attention in the news, too. Protein has been blamed for bone and kidney damage.

Let’s tackle these claims one at a time. An early study on protein detected that protein consumption was linked to increased urinary calcium, which was thought to lead to reduced bone mass over time. Later studies determined that urinary calcium was a poor measure for bone mass, and that protein actually had a protective effect or no effect on bone. Better research debunked the earlier research.

The Truth: Protein, even in large amounts, isn’t harmful to your bones or your kidneys.

More: Can eating too much protein be bad for you?

Myth 9: Vitamins from food are better than supplemented vitamins 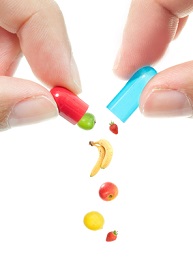 How often do you hear the claim that whole foods are better than supplements? It’s been repeated so often that the word ‘natural’ has a positive connotation, and ‘synthetic’ or ‘chemical’ has a negative one.

As is often the case with absolutes, it’s not so simple. For example, supplemental vitamin K has much better bioavailability  than its plant-based equivalent, due to the plant’s vitamin K being tightly bound to membranes. Useful non-vitamins can also be more effective in supplemental form. One example is turmeric, which is often coupled with black pepper extract when supplemented. Otherwise, turmeric’s bioavailability is quite low when consumed in food form.

Many supplements have a natural and synthetic form. This allows them to be accessible to many people. For example, if vitamin B12 could not be synthesized, it would be very expensive and an unsuitable supplementation option for many vegans, who need a consistent source of vitamin B12 due to their diet.

The Truth: Vitamins from food are not necessarily better than vitamins from supplements. This is a very broad statement, proven incorrect by the many examples of supplements fulfilling a vital health role that natural sources could not.

It’s easy to trace this myth back to its origin. Digesting a meal does raise your metabolism by a little bit, but the only way to sustain this elevated rate is to eat more food.

Total energy use comes from the amount of food you eat. Evidence shows the number of meals largely makes no difference.

The Truth: Though digestion increases the metabolic rate, this effect is negligible when compared against the actual caloric content of the food consumed.

More: Do I need to eat six times a day to keep my metabolism high?

You’ve likely heard all 10 of these myths repeated at one time or another somewhere in the media. Identifying misinformation can be difficult because it’s very pervasive.

And really, this is just the tip of the iceberg. You can just look at the way the media handles the latest studies – just look at the recent low-carb vs low-fat study. It requires a team of experts to really look into the evidence and figure out what can be applied.

Examine is an independent and unbiased organization that does not sell any dietary supplements.   You’ll learn about which supplements work and which are a waste of money.   They focus on the actual scientific evidence when it comes to supplements and nutrition and they currently have over 36000 references to scientific papers.   Download their #1 Guide to Use Supplements to Reach Goals.

https://www.yourfitnessuniversity.com
markd@yourfitnessuniversity.com
Lifestyle and Weight Management Specialist Your Fitness University
Mark Dilworth – Your Fitness University
Lifestyle and Weight Management Specialist and Myofascial Release/Self Massage Specialist. Since 2006, I have helped thousands of clients and readers make lifestyle habit changes with my 5-Star Body Transformation Plan, where YOU are the main STAR. The 5-Star Plan helps you to achieve better long-term health, which includes body transformation and ideal body weight. I do not recommend fad diets, quick weight loss gimmicks, starvation diets, weight loss pills, fat burner supplements and the like.